Is today and I had planned to drive the 4+ hours to attend & show support
for Veganism and compassionate living.
The fact that upon leaving Dallas at the end of the Fair,
I would be traveling for the next two weeks, visiting friends and family, including elderly
80-90 year olds, children, and people with compromised immune systems from
medical treatments, caused a change in plans.
With the viral situation in that area, though supposedly contained,
not worth risk of the unknown.

Will be noshing yesterday's leftovers from game watching that did not go well;
3 of my favorite college teams played so poorly that...well...
Let's just say I completely empathized with the songwriter of
"It's five o'clock somewhere..."
Hope today's NFL games are more entertaining.
No real irons in the fire, though, since my
Houston TEXANS

Posted by MizzBzVegan at 8:29 AM 2 comments:

Day 18
Hung out late last night with friends at a bar where their band was playing.
Only vegan food on menu, other than expensive salads with iceberg lettuce,
French fries and sweet potato fries, or tortilla chips.
Shared couple orders fries over my signature indulgence
Scotch Neat with Ice Water Back, please.
(Though this was first time my ice water came in styrofoam cup - go figure...)
Cool, though, cause you can walk out with the cup.

Hungry this morning so trip to
Urban Harvest farmer's market at Eastside
for sustenance from two of my favorite vegan eateries.
Sinfull Bakery

got mini-cinnamon rolls and Kolaches for game watching later.


Posted by MizzBzVegan at 12:19 PM No comments:

Day 17 Prompt
When was the last time you went to a campfire/bonfire? Tell us about it.
Last campfire/bonfire was part of the aforementioned AC vacay
(see day 16).
Hayride in between wine tastings one night.
Bonfire another night at the resort.
Vegan marshmallows weren't as widely available then,
But I did bring my own dark chocolate and graham crackers
for vegan s'mores around the fire.
And my own almond milk hot chocolate.
Told ghost stories to the children there.
Easy to do since we were sort of in the Jersey Pine Barrens,
also known as the Pinelands,
rural, heavily forested, sparsely inhabited coastal plains of southern New Jersey.
Fond memories; must do this again soon.

Posted by MizzBzVegan at 11:48 AM No comments:

Day 16 Prompt
Tell us about your ideal hayride. What would you bring? Who would be there?
WOW!
Haven't done an authentic hayride in YEARS...
Last one was 5-6 years ago, while vacationing in Atlantic City, NJ area.
FUN? YES!
The pre- & post- wine tasting enhanced the fun factor,
and lessened the temperature chilliness.
Then there was the one 10 years ago in my community.
Took my good friend's 3-year old daughter,
who seemed more fascinated by the diaper catching the horse poop than the ride itself.
Was in a residential neighborhood, along streets; so poop control essential.
IDEAL Hayride? Hmmm...
Would be an authentic hayride, rural or country setting,
somewhere where the seasons change enough that leaves change color
and we could enjoy that and jump off the wagon to admire the scenery.
Hot chocolate with/without marshmallows, warm spiked apple cider, wine...
Delicious finger foods, like spring rolls, hand pies, wraps, mini-pies/cakes
All Vegan of course!
And since my fellow S.L.U.T.s
(Stressed-out Ladies Unwinding Together)
have not had the pleasure of experiencing authentic Autumn/Winter hayrides,
I'd invite them along.
And, yes, Mr. Majestically Magnificent, you're coming too!
Posted by MizzBzVegan at 11:37 AM No comments:

Day 15 Prompt
Do you usually run late, early or on time?
Depends on event, situation, commitment, person(s) I'm meeting, whatever.
For flights, trains, travel situations where I'm not navigating, most often early,
So I can get a seat, or not be rushed.
Court for my volunteer advocacy work, early so I can park where I like,
And be there for docket call.
Medical appointments, on time usually, maybe early first time,
Or at unfamiliar location.
When I worked for pay, on time of course, with the occasional flex in early,
So whomever I was relieving from duty could give me a good briefing and get out of there.
Sporting events, on time, cause I like to be there for the singing of
Out National Anthem.
(One of my favorite renditions, the late great Marvin Gaye singing)
https://m.youtube.com/watch?v=QRvVzaQ6i8A

Posted by MizzBzVegan at 4:05 AM No comments:

Day 14 Prompt
What do you always put off til last minute?
Things I put off til last minute:
Things I don't really enjoy, like shopping.
Dressing, since retirement, tendency to wear "comfort clothes" all the time.
Routines, still getting used to how long these actually take to do.
Packing, while I thoroughly enjoy traveling,
I adore my home so much that I am reluctant to leave it.
What I do not put off is chowing down on delicious Vegan food!

Posted by MizzBzVegan at 2:43 AM No comments:

Day 13
Prompt:
Do you work well under pressure when it is crunch time?
When I worked for pay, yes, worked well under pressure at crunch time.
It was the nature of the business in which I worked,
Air Traffic Control (ATC).
Think of firefighters at a station.
Much of the time things are routine. They are there for their shifts.
They maintain equipment, keep up to date on training and any changes affecting their work,
handle the everyday things that come up, like people coming in for BP checks,
directions, socialize with coworkers on breaks, etc.
Yet, when they are busy, They ARE BUSY!
CRUNCH TIME often means the decisions they make have consequences
that affect people's lives.

Same with ATC.
Tremendous pressure, not always, yet often enough.
And that's the job.
"Skillful pilots gain their reputation from storms and tempests."
Or, as cooks are known to say,
If you can't stand the heat...

Unlike the song, Rainy Days & Monday's don't get me down.
More beauty from my gardens on this lovely, rainy day. 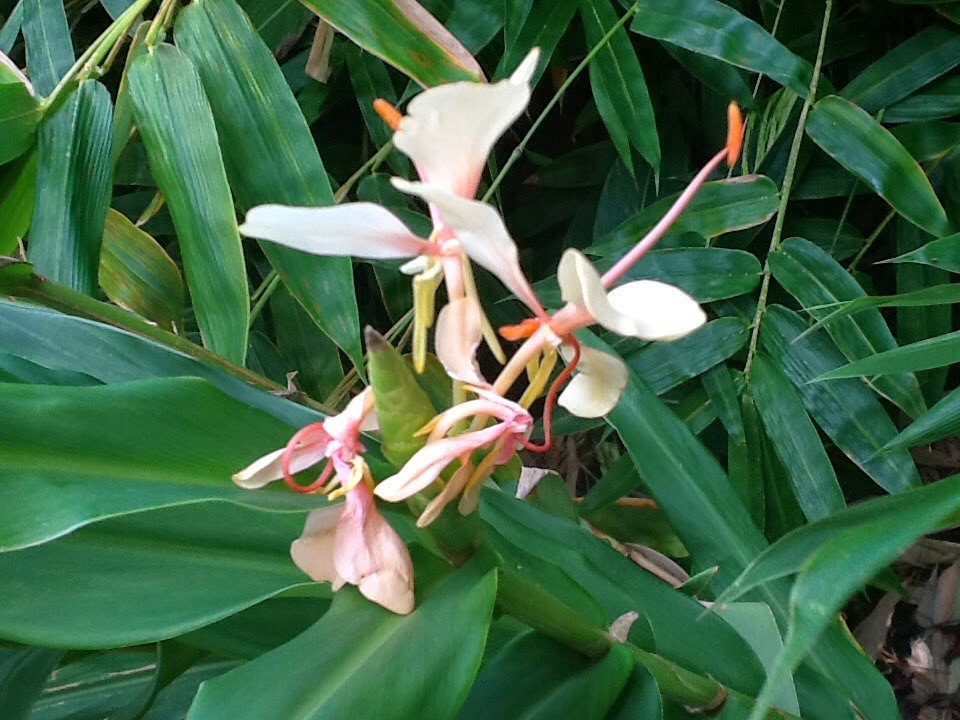 Posted by MizzBzVegan at 11:16 AM No comments:

MizzBzVegan
Southern Belle vegan mom to 4 sons, 1 daughter-n-law, grandmere to 1 fantastic grandson, his royal highness King James, 3 cats and a komodo dragon, 7th generation Floridian on my daddy's mama's side; 1st generation on my Mama's side. Rutgers SCARLET KNIGHT alum/fan. University of Florida GATOR alum/fan. Currently living west of the Mississippi, because Houston is one of the best kept secrets in the country.